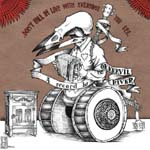 Don't Fall In Love With Everyone You See
Jagjaguwar ( http://www.jagjaguwar.com/ @jagjaguwar )

Finding a home in Texas by way of New Hampshire, Okkervil River sound like Ozark savants with lineage to Anton Chekhov, strumming away their broken, exiled souls with acoustic guitars,concertinas, and moonshine.

But I'll be damned if I ever met Ozark-mutants as worldly as this. Amid the brilliantly-arranged horns, pedal steel guitars, and banjos, comes cynical and resolve-seeking lyrical content about (surprise, surprise) broken hearts and homes, nasty spells with Vocodin-gobbling, late night chats with prostitutes who miss thier moms, and other stuff you don't want your children to learn in the schoolyard. From the footstomping, homesick love ode of "Red," to the surreal underwater warbling of "My Bad Days," and even a guest vocal by Texan resident genius-in-question Daniel Johnston, this record pleases second after second.

It's stuck in my CD player and won't come out, and my heart's fallen and it can't get up. But mandolins, organs, duets, and simply brilliant songwriting does it's best to heal you and then break you all over again just like all the best art does. If Holden Caulfield was from Texas, this is what he'd have been hearing in his head, and he'd have met William Burroughs and Dylan Thomas on the streets of Branson, MO during his travels, and everything woulda been alright. Note that it's not all down-tempo traditional stylings there are anthemic refrains and exclamations, introspective claims of glory, moments of supreme clarity, and a lullabye so tender you'll want to sing it to your kids at night. It brings it all back home after being clouded by the certain daily relentless realities a passenger will see while traversing the byways. Of course half the fun to getting well is the journey back from sick. Okkervil River have penned the soundtrack to this ever-cyclical process, and you'll be glad to get to the end and start the trip all over again.