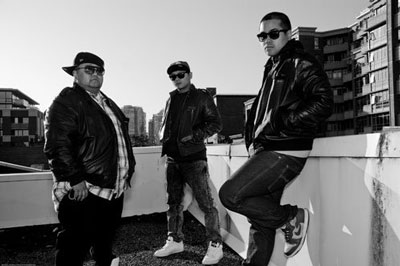 
Bustinï¿½ Outa the Box with the Boombox Saints

The Boombox Saints have infused the slow burn of soul into their hip hop roots on their new EP - Bringinï¿½ The Boom Back: Based on a True Story

The boombox was a music maker of another era.  Loaded up with heavy D batteries, the boombox was portable and borderless, and helped to define the music community of hip hop.  The Boombox Saints are music makers of a new generation and, like their namesake, are helping to define a new sound with their unique blend of soul and hip hop.
Adlib, Freeky P and Huggy Fresh have got each other’s backs both on and off the stage. Their camaraderie is as tight as the flow.  Adlib who grew up in Vancouver and Huggy who moved from Manitoba, have known each other since elementary school.  “The music just kind of came along as we grew up,” recalls Huggy.  Originally from Hamilton, Freeky P moved to Vancouver to avoid the steel mills and pursue his music career.
When asked to describe Adlib and Freeky P, Huggy is quick to respond amid good natured laughter.  “Adlib is like the glue between the group, he’s a good blend between me and Freeky.  Freeky P is an incredible MC, very raw.  I feed off him when it comes to writing and deliveries.”  When it comes to describing himself Huggy is somewhat reticent, and, for a man of words, uses few. “I’m just a nice guy,” he quietly says.  When prompted he adds a few more words. “I’m just a nice guy with a few surprises up my sleeve.” 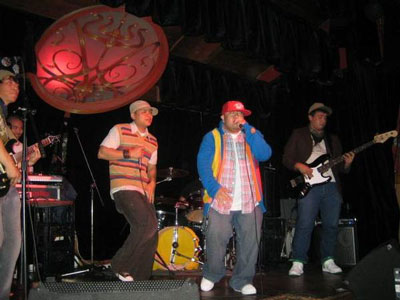 
The two MC’s, Freeky P and Huggy Fresh compliment each other’s styles although they are quite different.  Freeky has an edgy and dangerous sounding delivery; Huggy’s is more sinuously smooth word play.  Vocalist Adlib comes in with an expressively melodic, sultry and soulful sound.

From this diversity flows hip hop music that stands out in the urban music landscape.  Their first official EP, The Boombox EP introduced the group and showcased an old-school hip hop feel.  Their latest EP Bringin’ the Boom Back: Based On A True Story is a project that highlights another side of the Boombox Saints.  “Bringin’ The Boom Back is such a different vibe than the [first] EP,” says Adlib “We wanted to show the diversity of what we’re trying to do with Boombox.”  Freeky P continues, “The new EP is all soul samples.  It’s rooted in R & B and hip hop and has a lot more melody.  It’s a more soulful sound.”   This is music that the trio grew up on according to Freeky. “I was influenced by the early 90’s R & B hip hop, Fugees and Tribe Called Quest. Bad Boy was a big influence on all of us.”

Bringin’ The Boom Back features the work of several different producers, each bringing a different vibe to the mix.  Huggy explains, “We were looking for a certain type of feel for this project, which was that soul sound, but not necessarily similar sounding in terms of the beats.  The producers that were on this project all have a different sound.”   While the beats help identify the feel of the songs, the lyrics are raw, relatable and real.   This emotional nakedness is a connective theme throughout the EP.  When it was commented that the songs deal with dreams, heart break and the like, Freeky was ready with a quip, “That’s R & B, love songs,” he says with a chuckle, “Philippino’s  just love their love songs.”

So who has had their heart broken to write those kinds of words?  “I’m pretty sure everyone has had their heart broken once,” Freeky says. “Definitely, I have been.”  Adlib says “I try to put myself in other people’s shoes.  This is a project that we really wanted to be open.” Adlib continues, “When I listen to music I connect more to the artist if I can relate to what the artist is going through.  So obviously we wanted to relay our experiences into our music.  Not necessarily in detail but in a sense that the people listening can say hey, I went through that exact same thing.”

The Boombox Saints have a current of unpredictability which defines their well known and energetic shows. They have shared the stage with some of hip hops most highly respected artists, like Talib Kweli, Mos Def, and Kid Cudi,  and say it was a surreal experience to feel the acceptance and love of the mass of people they performed for at these shows.  They are fans themselves and this keeps them rooted and connected to the people.  “We like trying to add different elements that we like seeing when we see shows,” says Huggy. “People should be entertained when they go to a show.  We want to give them a show they remember.”

The Boombox Saints are on a rising trajectory and this is what they want to tell you.   “There’s so much more. We have so much more to share. If you don’t love us now, you’re sure gonna love us later.”

One thing is certain, Adlib, Freeky P and Huggy Fresh, whether in the studio or on the stage give 200 percent of themselves and at the end of the day, leave it all on the floor.