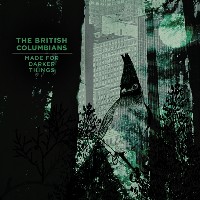 Made For Darker Things
Rural ( )

From the bluesy drum intro on “Evil in the Pines” to the wistful flugelhorn of “Heart on the Wrong Side,” The British Columbians' sophomore album is as refreshing as the west coast air that influenced this Vancouver quartet’s release. Vocalist Girard Knox’s vocals have a spectral effect on introspective lyrics, (You never wanted to be what you are/ but you know what you oughtta believe – Owen, “Teeth of the Sea”.) This haunting lyricism, as well as the blues influences on Knox’s guitar and Christopher Ellis’s bass, are a spine-tingling reminder that British Columbian music is not limited to pop recordings celebrating sunny days at the beach. Indeed, the pump organ featured on “Coldest Winter” and cynicism evident in “Broke & Busted” are anything but bright. With its’ beautifully sinister tone, this album floored me upon first-listen. Made For Darker Things is nothing short of impressive and – even with The British Columbians distinctly provincial composition – is required listening for anyone who wants to spend 38:45 entertaining his or her dark side.