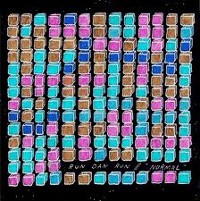 Run Dan Run’s newest album “Normal” immerses the listener in such a warm spacey atmosphere one may expect it to have been produced by Broken Social Scene's Kevin Drew. The band hails from Charleston, North Carolina, and are joined by several friends who provide backing vocals, horns and samples to the band’s guitar-bass-drums-keyboard core. “Normal” is the trio's second full-length album, and it possesses the production quality and musical experimentation of a solid sophomore effort.
The album features a good balance of introspective shoegaze drone and an upbeat punch that keeps “Normal” from getting stale. The samples and synth elements to songs like “Box-Type Love”, “Cut-outs” and “Anonymous Girl” lend a pop vibe to the record. Along with the multi-layered instrumentation, lead vocalist Dan McCurry sings with a breathy style that adds to the warmth and atmosphere of the album. It is possible to be so engaged in the depths of the music on this album that the lyrics go unnoticed.
Run Dan Run has created a record that begs for headphones, and more than a single listen. “Normal” is like that favourite urban neighbourhood that you are so accustomed to you could easily navigate it in the dark, but every time you do you are so immersed in the cacophony you find yourself noticing something you have never seen before.