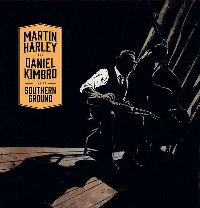 Guitarist Martin Harley has a "regular" band and bassist Daniel Kimbro has played on various people's projects. One day they were introduced by mutual friends and they decided to make a record together...in one day. Live off the floor at the Southern Grounds Studio in Nashville. They plan to tour together in the Spring but it is still hard to tell if this is a one off side project or a new path. This recording is of material Martin Harley has recorded and performed with his band and in solo concerts. It's blues and blues influenced roots music, with touches of country poking through.

Harley is a Englishman with an authentic sounding southern drawl, and complete mastery of slide lap guitars and the usual assortment of National Steels and regular acoustic guitars. The chemistry he and Kimbro have is undeniable, they harmonize well and play off each other, generously giving each other room to shine, weaving lines in and out and around each other. For those familiar with Martin Harley's previous work it is still worth hearing them revisioned, and for those of us who haven't heard either of them perform Live from Southern Ground is an excellent introduction. The CD was release on Sept. 25 on the Del Mundo label and is highly recommended for blues and roots fans.