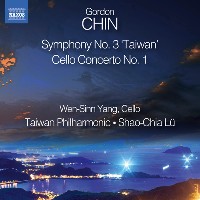 Gordon Chin, born in 1957 in Taiwan, is one of the most active composers in his native country. His extensive catalog of compositions includes four symphonies, a cantata, violin concerto, piano concerto, numerous choral works; chamber works, five percussion quartets, and works for solo instruments. Featuring an array of exotic Chinese percussion instruments, Symphony No. 3 ‘Taiwan’ is a dramatically powerful work cast in three movements which explore his native country’s turbulent history. Throughout his Symphonic work Chin reveals a masterful brilliance in orchestration utilizing the entire length and breadth of the Taiwan Philharmonic. The symphony reflects the feeling of hostility and suffering by the people of the island of Taiwan . He has captured the essence of an imminent catastrophe very much likened to Gustave Mahler’s 9th symphony in which Mahler has been portrayed as a prophet of the twentieth century. The cello Concerto is a dark lush masterwork played with brilliance by Wen-Sang Yang. Chin has created numerous points of tension by the use of dissonance and the excitement grows as the cellist double stops forcefully and the low brass with trombones expresses brutality. The soloist plays in recurring restful periods which suddenly explode into violence. This is all captured by the orchestra and the cellist who shows strength and a very considerable dynamic range. Within this work one hears the cello playing a recitative calling out with cries and moans. This is the performance of world class cellist. Here composer Gordon Chin speaks out musically with the weeping of the people of Taiwan for peace and happiness. This album (Naxos 8.570615) released in 2015 has a beautifully illustrated 8 pages of cover notes. The album characterizes the bold struggle of Taiwan and fashions for listeners the thunder and red hot steel in the constant battle for survival. It is an instrumental tour de force.