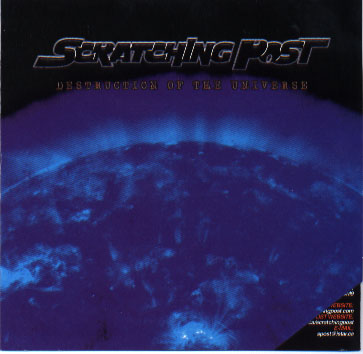 Destruction Of The Universe
Squirtgun ( )

That's right cats, a brand new Scratching Post has arrived for your enjoyment! Now, let's try not to tear it apart too quickly! The energetic pop-core foursome from London, Ontario are back with their second major effort Destruction of the Universe, the long-time-coming follow-up to Flamethrower released back in 1996. Short and sweet, Destruction takes only a brief eight tracks to accomplish its task, with a quick one-two punch of raw ambition. One: girlie rock lyrics dripping from Nicole Hughes' irresistible candy apple lips. POW! Two: massive and crunchy thrash-metal guitar underlying the whole production, courtesy of her Slayer convert band mates. ZONK! There you have it, two sounds for the price of one. If you enjoy Liz Phair, Veruca Salt, Helmet, Slayer, Voivod and/or Kiss be sure and check out these self-professed pinball wizards. Of course, knowing that the driving force behind the band, singer Nicole Hughes, is a fan of Duran Duran and Shania Twain only intensifies the image in my mind of three metal heads shackled to the stage, dying to let their demonic tendencies loose upon an unsuspecting, besparkled and tank-topped all-ages crowd. Insert maniacal laughter here. Obviously she keep these beasts on a pretty short leash, as they fill in the songs with heavy bits here and there and even manage to break out a little with some scary screams on the final track which lends the hastily assembled album its title. Eager to be signed onto a major US label, Scratching Post ventured south of the border to create the album under the watchful mastery of Phil Nicolo, famed producer of Urge Overkill and Life of Agony. They certainly caught Nicolo's ear, and his influence in the mixing is apparent as you listen to the more feminine vocals surf on top of the waves of power chords without losing any ground. Much like Urge Overkill, the overall energy level is high enough on both sides to maintain a certain equilibrium. As I mentioned, this cd only contains eight songs for a total playing time of a mere 25 minutes. The single "Bloodflame" is rather noteworthy, but the material has often been described as sounding "eerily similar." Basically, when I hear this cd (which can easily be done in one sitting) I hear a cash register in the back of my mind. We're talking huge commercial potential here and this album officially puts Scratching Post on the international auction block. Going once...going twice.... Look for big things from Scratching Post, including a video for "Bloodflame" which is currently in the works for release in April. As well, the band has plans to tour extensively in the spring and summer of 1999. Recommended Tracks: 1. Unforgiving Love 2. Bloodflame