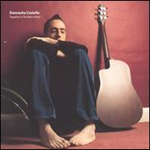 Together is the New Alone
Mille Plateaux ( )

"Recorded on the fifth floor while Dublin slept," read the liner notes of Together Is The New Alone; it's an apt statement for this gentle and beautiful music. A little denser than music found on Brooklyn's 12k label, Costello's music shares the same appreciation for warm clicks and cuts, but here it's wrapped in a warm glow of humming layers owing as much to Reich, Xenakis and Eno as to the 1,000 plateaus camp.

Costello, a Dublin-based artist, began playing minimal electronic music in 1996. Previous to this, he had been cultivating a reputation as one of Ireland's most exciting techno producers, releasing music on his own minimise label under a variety of aliases. A full-length release followed in 2000, issued by the influential Force-Inc. label. Costello has now re-focused his energy again, veering off to work on various projects that live outside the realm of "music", and has begun creating audio works for installation projects and authoring his own software.

There is a wonderful movement to Together Is The New Alone from track to track, a continuity that gives the music a sense of journey. "Daydream Belief" shows Costello's hyper-minimal style which successfully interrupts the lush flow of tracks like "Your New God." While Costello may encroach upon an over-sensitivity, a cuddly pussy-kat kind of mood, he always manages to pull in the reigns at the critical moment, letting the music remain gorgeous and dramatic.