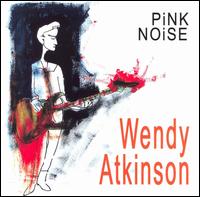 Pink Noise
Smarten Up And To The Point ( http://suandgttp.blogspot.com/ )

It?s always exciting to come across an artist who isn?t afraid to explore. Wendy Atkinson is one such artist. With her sophmore album PiNK NOiSE she creates a group of songs that are not afraid to meander into unforeseen territories. While being an inconsistent album, PiNK NOiSE still comes across as a refreshing and engaging listen. At it best, PiNK NOiSE displays Atkinson constantly exploring the limits of her bass, as well as sound as a whole. Take "Tyranny of Housework" as an example. The song revolves around a looping bass line that appears content in lulling the listener to sleep. However, just before it is able to do this, Atkinson starts adding sounds from various household appliances such as dishes, taps, and a vacuum. The end result is a song able to paint an intriguing picture of a household gone wrong. At moments such as this, PiNK NOiSE places Atkinson in the same territory as previous musical explorers such as Brian Eno or Sonic Youth?s Lee Ronaldo. However, just as Ronaldo and Eno benefited from collaborating with other artists, so too could Atkinson. PiNK NOiSE ultimately leaves you wanting more. While Atkinson clearly has a gift at experimenting with sound, she would do well to add more to her music than purely repeating bass lines. Perhaps by working alongside other musicians, poets or artists, Atkinson would be able to take her music to levels not reached by her solo work. Despite its inconsistencies, PiNK NOiSE is still an accomplishment. It displays an artist unafraid to take her music in new and exciting directions. The possibilities are endless for Atkinson, and she will be an artist to keep an eye on in the future.