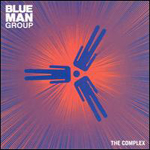 Face paint, PVC pipes, and a Vegas live show; experimentation has always played a key role in the creative efforts of the Blue Man Group. Originally forming in 1987, the three-member group quickly became part of New York City's underground art scene, and for good reason. Whether staging a funeral to rid the world of 1980's glitzy byproducts to creating false ad campaigns before their first Chicago performance, their originality has often benefited the group. Expanding into a collective of 30 members, the Blue Man Group now stages regular shows in New York, Boston, Chicago and Las Vegas. But while the group's live shows may still contain ingenuity, it got lost somewhere during the recording of The Complex, their sophomore album and first attempt at entering the world of rock music. It's evident these musicians are seriously devoted to their craft, inventing and playing on their own line of melodic percussive instruments. The sounds resonating from the complex rhythms are truly unique, as evident on the opening track "Above," and the closing track, "Exhibit 13." But these tracks get lost amidst the tracks featuring a handful of mainstream artists who make an appearance on the album. These guest artists were included to inject vocals - a previous rarity - into the mix of the Blue Man Group. Granted, the group's laid-back rhythms were cleverly constructed to complement the trademark drawl of Dave Matthews' voice on "Sing Along." However, the song loses its sincerity as it progresses, becoming far too polished and making you wonder if it was purposefully designed for mainstream radio appeal. While the finished product leaves a sinking feeling, the group deserves credit for attempting to dive into something unfamiliar. Hopefully the Blue Man Group will stick closer to the root of their percussive realm, something that is a little more familiar yet still quirky enough to distinguish themselves from the rest of the pack.