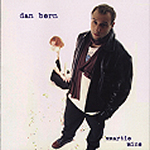 Dan Bern is a funny guy. It shows in the humour that runs through his music, coming from both the twists and turns of the lyrics and from the delivery. For Bern, this is both a strength and a weakness as the interest in his music often relies too much on the jokes rather than the music. That said, there are some genuine pleasures on this album because, after all, Dan Bern is a funny guy. On "Talking Woody, Bob, Bruce & Dan Blues" he manages to fit in lively impressions of each of the famous songwiters. On "Krautmeyer" Bern muses on importance of image and a good name. Could Charles Krautmeyer become as infamous had he not changed his name to Charlie Manson? Not deep stuff but entertaining. Bern's voice is an effective, if not a beautiful instrument. Like Bob Dylan or Elvis Costello, whom he sometimes sounds like, it's the way he uses it that captures interest rather the sound of it. The electric-folk instrumentation nicely complements his observational story-songs. This is a fine record. Not as good as one of his often terrific live shows, but songs like "Crosses" hint at a more serious side which I wish he would give more play to. Laughs aside, I can't help feeling there could be more here if he would just dig a little deeper.