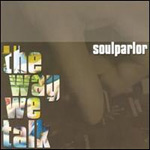 Why is it that so much funk today, so much jazz, sounds so bland, so forced, so bad? It's not that the musicians lack talent, or that the arrangements lack skill. Production techniques are at an all-time high and the recordings sound stellar. Nothing is missing, everything is there, all tasty for consumption. And it is perhaps this commodified sense of marketed simplicity - not one sound there to challenge, nothing out of place to harm you, question that fragile ego - that makes the latest jazzy-loungey-electronica-hybrid offering from Soulparlor as forgettable as the coffee that the average consumer of this disc will undeniably buy when they hear this album being played in their local Starbucks. (And that's a run-on sentence because it's a rant, dear reader). I wasn't about to cut into this album until I came across track 6. Up until this point, and although I was grumbling to myself about the post-lounge sound and its shortcomings, I was secretly enjoying the laid back, beautiful recordings on this disc that made the sun glinting off the cemetery across the street a packaged poetic moment. But it was track 6 - "What Goes Around..." - that really made me do a double-take for all the wrong reasons. It's a funky bass-guitar driven r 'n' b deal, which is nice enough until MCs Demand and Bryant start laying down the most banal lyrics I have ever heard outside the realm of pop music. Words of revelation: "It's like this (uh duh)/It's like (uh) that/So it comes around a way/Monday through Friday/(duh)/it's like this...". Judge for yourself. There are some good, funky lounge tracks on this German disc with all the live-fusion fixings, perfectly set up for you SUV-drivin' martini loungers out there. "Fly By Night" is nice, and I could see putting it on a mix CD with other good loungers like Thievery Corporation and Dzihan & Kamien. But it's not a stand-out piece. Where D & K introduce worldbeat innovation, Soulparlor remains traditional; and where Thievery Corporation samples the best of the traditional, Soulparlor stays middle-of-the-road. The middle-of-the-road is comfortable. "Peanuts" is a neat little loungey jam, and "Prove Positive" features some great bongo drumming and a little flute action - sort of like a 70s soft porn flick, it never gets out of hand and you get to see what comes out in the end, guaranteed every time. But then there's these annoying "Parlor Ludes," ie. sonic introductions, where some guy with a bit of echoey effects says, "Yo mellow and deep/Mellow and deep is the way we like it down here." Alright. Maybe I could deal with the indulgence if it wasn't for "What Goes Around." RECOMMENDED TRACKS: anything but "What Goes Around." - Tobias van Veen, Montreal correspondent for CiTR Vancouver's Discorder Magazine