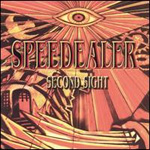 The first three or four songs on Second Sight - Speedealer's second record - are speedy, punked-up metallic rockers that leave the listener in an air-guitarin', caffeinated high, and features a nice thick production, courtesy of ex-Metallica bassist Jason Newsted. However, the band start mixing up shorter punk tunes with raging thrash metal around the midpoint of the album, giving birth to a sound that actually begins to confound the listener instead of welcoming them to the party. Maybe it's just me, but I've always been annoyed when a band hops from genre to genre as they progress from song to song It begins to feel more like a novelty than a serious band. Speedealer are for real though, as tracks like the absolutely smokin' "All The Things You'll Never Be," or the looming, pissed off opener "Leave Me Alone" demonstrate. It's frustrating, because the band's lack of cohesion seems to be entirely on purpose, and it all sounds good on a song-by-song basis, but as a whole it's too jagged, too confusing. Second Sight consists of perfect radio tunes, and a totally smoking album - but only when dissected one track at a time. The large picture, the forest from the trees or what have you, is suffering from a lack of cohesion, albeit one that the band no doubt had a blazin' time putting together, which is what counts. I guess. RECOMMENDED TRACKS: "All The Things You'll Never Be", "Leave Me Alone", "Second Sight"