More By Sex With Strangers 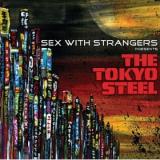 There are plenty of strangers that you shouldn't bother listening to, including the five members of BC-based band Sex With Strangers . The Tokyo Steel, their new pseudo-concept album, features ten songs and three instrumental insert tracks all loosely based on a night in Tokyo.
Sex With Strangers' combination of house party rock and synth-disco seems like it could fit the Tokyo theme, but the concept severely lacks originality given Moby's Last Night album is still fresh in the minds of electronica junkies. And that's just where the problems begin.
Lead singer Hatch Benedict's over-pronounced vocals ruin any appeal that the brief instrumental tracks could possibly generate. Benedict's faux-crooner persona on “Last of the Unreals” comes across like a bad Morrisey imitation, and remains out of synch with the music and the backup vocalists on the rest of the tracks.

“Only Where Night Allows” is the only track with any potential thanks to Isabelle “Bobby” Dunlop's soft, charming voice. Too bad her voice is quickly overpowered by Benedict, dashing any hope that the tail end of the album couldhold some redemptive value.