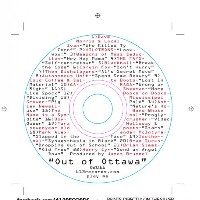 Hey wow, someone finally thought to serve up a disc-full of Ottawa-brewed music. My first thought was that this would help put our fine city on the proverbial musical map. I've been keeping tabs on the Ottawa music scene for a number of years through my college radio interview program at CHUO FM (Hop The Fence, Fridays at 5 pm…shameless plug!). One thing I've learned during this time is that the city has a wealth of talent in a variety of genres. Many bands have come and gone, but the talented individuals that make up the fabric of the local scene through different iterations of outfits are the thread that knits Ottawa's live and recorded music scene so snuggly. (I kill me!) The disc illustrates the diversity of the nation's capital home talent.

There is nothing much cohesive on the disc and really, the only reason these songs are compiled is that they originate from Ottawa. This makes it an ideal selection for those days when you just don't know what to listen to but might enjoy a few surprises around each corner.

As might be expected, there are plenty of favorites who are not included on this initial compilation, and clearly absent is anything from the city’s thriving country and alt-country scene. What this means of course, is that a follow-up (or many) are most definitely warranted. Hats off to 613 Records and James Brummel for taking the initiative and putting this together. Let's do it again real soon.