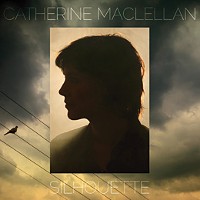 Chock-full of Jungian symbolism, bird allusions and metaphors, Catherine MacLellan invites you on a foray into her psyche with a spin of her new disc, Silhouette. In her weblog, posted July 5 this year, Catherine states that Silhouette is the first album “that doesn’t have a song written about the loss of [her] father, Gene MacLellan”, acclaimed Canadian singer/songwriter who passed away in 1995. Over fifteen years since his passing but doting father remains watching over daddy’s little girl through the disc’s vivid imagery and, dare I say, a dash of anthropomorphism. She has written him into many of the album’s tracks like “Black Crows” and “Sparrows”, where we find his spirit soaring through expansive Canadian skies. Other songs like “Keep My Eye on You” beckon in search of approval, albeit quite likely unconsciously on her part.

The disc starts off upbeat and optimistic with Ms. MacLellan getting in touch with her naughty side and cheekily enjoying the prospects of “Stealing” a little time with a lover. She’s delightfully playful again on “Eastern Girl”, a great little ditty celebrating her east coast roots. Yet she also deftly expresses the conflicting guilt that results from having such uninhibited fun. On the track “True Love”, she struggles with its definition and meaning, asking anyone who cares to muster a response “what is true love anyway?” Surely Carl Jung would have a field day with Silhouette – the title itself rich with symbolism.

MacLellan easily gains the listener’s empathy and understanding with her magnificently plaintiff vocals and delicately crafted lyrics. Despite my dime-store psychological assessment of the songstress, Silhouette, is a beautifully crafted disc that showcases her immense talent as a classic country-folk artist. She has mastered the art and delivers each song as though it was with her final breath.

Her father’s presence on the disc is confirmed with her heart-wrenching version of “Snowbird”, (yet another bird analogy!) with contribution by Jim Cuddy (Blue Rodeo). Arguably the most archetypal Canadian hit song every written, it is one that her father penned and was made popular by Anne Murray in the 1970’s. I myself, never realized how sad that song actually is. I always thought it to be a song of hope and adventure but Catherine delivers each line with somber fatality. Somber yet exquisite.