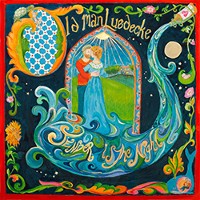 If Old Man Luedecke ran a race, he would be out of blocks quickly. The race might not be a marathon, but Tender is the Night is the kind of album that can come off as serious as well as joyful depending on time, place, and company.

After sitting in Toronto traffic one evening, I listened to this album…. a few times. It provides an easy listen with cries and laughs throughout. "Broken Heart Buddy" is the cutest song on this album – side note; I am a 6'1" 210 pound guy. "Little Stream of Whiskey" plays like a sad song I would drunkenly play at a wedding. Its slow and soothing presence puts your head in that great place where you hope to be lucky enough to experience this song with someone by your side, one day. Depending on how much whiskey you drink, it may become a tearjerker.

It's an up and down record because the banjo playing Torontonian that now resides in Nova Scotia is unpredictable. He will give you two songs (above) that make you want to call you ex and apologize for sleeping with her cousin. And then all the sudden you are going through the A&W drive thru. "A&W song" is a doozie, and pretty entertaining. We've all been there: late night, post-bar A&W drive thru runs. After the carb fix, Old Man Luedecke convinces you that "I'm Fine," and all is well.

He knows how to construct a record that is never too upsetting or overly busy. He puts his banjo through one hell of a ride while having other instruments join in on the fun, including a violent acoustic guitar. The album runs roughly 37 minutes long with all kinds of surprises. Great backing vocals, perfectly placed on and off-chorus accompany some of the songs. Either way, Tender in the Night favourably exhibits Old Man Luedecke's great instrumental skills with a hint of Brad Paisley vocal style. Lyrically, this album is strong and very thoughtful. Each song is painted beautifully in bright colours; but includes shades of grey on some of the mellower tracks.

My suggestion: If you have a 30-minute commute, throw this on and jam out to this folk genius.