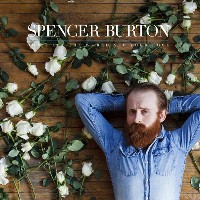 This is and isn’t the first solo album for Spencer Burton. He’s released two previously under the moniker Grey Kingdom, but this is his first under his given name. Don’t Let the World See Your Love is a stark, clean country-folk album. While Burton has roots in loud music (Attack in Black) that I’m sure influence his current projects, the album’s evenness is striking.

Produced in part with collaborator and friend Daniel Romano, Don’t Let the World See Your love is down but not dark—whereas the Grey Kingdom albums had a certain cloud over them. This album, comparatively, is less opaque (perhaps ironically, given its title). It has a personal, storytelling quality with lyrics more like letters home than like poems. Burton takes complicated sentiments and turns them into music that, mostly, feels easy. That said, songs like “Blessed Son,” which, is a stand-out, have a perfected heaviness to them. (Another noteworthy track is the opener, “Death of Gold.”)

It’s like Burton was always here, familiar in that way, which makes sense because he was. If Don’t Let the World See Your Love came out of darkness, experientially and musically, it’s a pleasant emergence, no edge lost. In “Bluebird’s Song” Burton says “it’s been a long, long year.” While the words say he’s tired, the work does not.