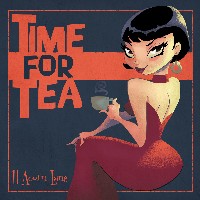 With Time For Tea, 11 Acorn Lane  has developed a distinctive sound within the fairly narrow idiom that they have chosen to work in. It is album #6 for NYC based artistsThomas Feurer and Neal Pawley and is released on Feurer's Wooden Hat Records . Most music, particularly when you slice it into narrower and narrower genres and sub-genres, sounds similar. The trick is to find a way to differentiate from the pack. These guys do.

Like most electro swing (or swing house, if you believe iTunes) Time For Tea is light, peppy, happy music; very tightly produced. But unlike some artists, this is not sampled and looped old recordings over a new beat. These are all original compositions and Pawley and Feurer play a whole range of instruments on each track and their virtuosity is obvious. There are electronic elements to be sure, besides some of the drums there are some pure synth sounds skilfully woven into the pieces in such a way as to sound perfectly normal, until you realize the style of the piece predates most electronics. These are fully fleshed out arrangements with counter melodies and horn shots and Austin Powers style flutes in places. I like that they don't take themselves too seriously, as evidenced by such titles as "Let's Face It I'm Cute" and "Leafblower Blues". Above all these guys know how to swing.

11 Acorn Lane manage to find a lot of diversity within the swing style, a bit of lounge here, some basic '20s, '30s or '40s swing, even some klezmer/balkan/gypsy swing. Somewhat oddly there is also a very kitschy 3/4 time Polska, betraying Thomas Feurer's Swedish roots. Like I said, they don't take themselves too seriously.

This CD will fit in nicely in many lighter club dance mixes, where it would play well with tracks from neo-swing artists like Alice Francis as well as other electro-pop tunes. It might even get a thumbs up from serious swing dance enthusiasts who tend to be a little more pure in their music choices. I might even program a track or two into a pure jazz mix just to lighten things up a bit. Electro swing is apparently much more popular in Europe than in North America, which is a shame because this is a really good album.