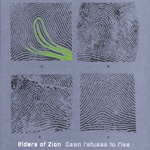 It's hard to talk about an album that carries both interesting music and a strong political message, especially when you don't agree with the political side of things. Therefore, I'll refrain from commenting on the politics of Dawn Refuses to Rise, which, musically, is a debut to be proud of.

The Elders of Zion are a quartet based around the production, editing and processing abilities of Joel Schalit, with guitars added by Vance Galloway, Luis Illades on drums, and Phyllis Stein, who adds occasional keyboard riffs. They borrow many spoken word samples from various places, among them protests, plays and phone calls, most in the anti-capitalist vein.

The music itself is reminiscent of Montreal's 1-Speed Bike, or similar electronic protest music, with a heavy reliance on hip-hop style drums and ambient backgrounds. The CD is a pretty easy listen, although the style never really changes and does get repetitive after the first twenty minutes or so. The second track, "Future Avant-Garde Society", is one of the stronger songs on the disc, opening with beautifully mangled vocals, and continuing with ring-modulated atmospherics and a steady beat to drive it forward. The next breath of fresh air comes later on in the album with the eighth track, "All That's Solid Melts Into Air (Slight Return)." Although containing no vocal samples, the track finally wanders down the path labeled 'experimental' with some exceedingly unnerving high pitched frequencies shifting throughout. The standout track on the album comes with "What's Your Badge Number?". Although perhaps not the most musically interesting piece, it does reveal the most coherent, straight forward protest vocals samples on the album, with field recordings from various demonstrations across the United States in 2000.

All in all, Dawn Refuses to Rise has some interesting pieces on it, although among them are some relatively mundane compositions, and it is engaging at times. While not a necessity in any collection, it does offer a fairly unique take on the good ol' fashioned genre of anti-capitalist music.