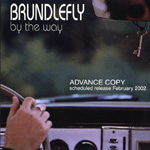 By the Way
Tonic ( http://www.tonicrecords.com )

Now here is an album that screams Canadian pop rock. Having grown up listening to mass media proclaim Canadian rock as the be all and end all, I am more than a little wary when I hear about "the next great indie band from Canada." With this in mind, I was a little unsure about what to do when I saw the press release for By The Way. On one hand, it seemed to be just another indie band blowing its horn, albeit blown by ex-Limblifter Ian Somers, while on the other, their list of influences included Mercury Rev, who in my opinion, are one of the most under-appreciated bands out there. Unfortunately, I can only hear a Mercury Rev influence maybe two per cent of the time, which is not nearly enough. On the other hand, Brundlefly's new album seems to be composed of the best part of every northern indie rock album made in the past ten years. The sound/style appears to have been abducted by the mafia, set in concrete, and left at the bottom of a harbour to fill the entire album with the exact same feeling. That feeling is a happy summertime chill out/make out feeling. The album's first single, "Revolution," really does sound way too radio friendly and contrived. Then again, the string arrangements are perfect, especially on the track "College Try." The lyrics are always just what you want them to be, and the band isn't afraid to use effects and unorthodox instrumentation (see "Hot Summer Day"). At the end of the day though, Brundlefly are just another indie rock band from Canada. RECOMMEND TRACKS: "College Try", "29 Days", "Hot Summer Day", "Wish Me Well" - Alex Unger, CFFF Radio, Peterborough, ON