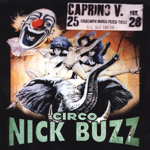 Coming off a very successful solo project with We Didn't Even Suspect That He Was The Poppy Salesman, not to mention 10 full-length CDs with the Rheostatics, Martin Tielli is rapidly becoming one of the more prolific singer-songwriters on the Canadian indie rock scene.

The Nick Buzz project initially came about in 1994 as a Joni Mitchell tribute put together by Intrepid Records. The record, Circo, was then recorded in 1996, but only as a very limited run, and is now being re-released. Even compared to Tielli's previous work, this record is very experimental. His trademark voice and hook-laden writing style are still present, but are mixed with music that ranges from beautiful, to exotic, to downright weird. The result is a very eerie album filled with so much space, it almost sounds as though it was recorded in a gigantic abandoned church. Even with the weird effects, overdubs and samples, this album is almost catchy. I find myself walking around singing to this album, but the lyrics are so offbeat that I can't let anyone hear me. Lyrics like "Yes, there's a monkey in my underwear/And I don't really care/ About nothing" ("That's What You Get For Having Fun") aren't suppose to be catchy and singable, but somehow they are. You just have to be careful where you sing them - mouthing "I would and I'd/ I'd suicide for you" ("A Hymn To The Situation"), got me some funny looks in the cafÃâÃ¢â¬Å¡.

While this album isn't nearly as impressive as ...The Poppy Salesman, it's different enough that both albums are worth owning. Martin Tielli is at the point in his career where most musicians would put simply out a B-sides album featuring a bunch of songs that weren't good enough to go on his other albums. As great as B-side albums are to own and to show off to friends, all they really do is take up space on a CD rack. I give Tielli full points for trying to fill a different niche with this album. This probably isn't the first Martin Tielli or Rheostatics album you should buy, unless you're really into the electric stuff, but if you like the rest of his music it's definitely worth a spin.

RECOMMENDED TRACKS: "That's What You Get For Having Fun", "River"