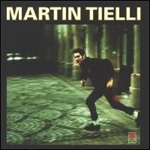 We Didn't Even Suspect That He Was the Poppy Salesman
Six Shooter ( http://www.sixshooterrecords.com/ @SixShooterR )

Martin Tielli is a member of the Rheostatics. This is a fact difficult to ignore when discussing his solo debut. But, thankfully, the inevitable comparisons are rendered insightful, and ultimately transcended, by Tielli's distinctive voice and original set of songs. We Didn't Even Suspect That He Was The Poppy Salesman is a strong record by any standards, even by those of one of the most respected and beloved bands in Canada.

What is especially wonderful about ...Poppy Salesman is its stark, spare beauty, indicating a willingness on Tielli's part to move beyond what many have pinned down as the trademark Tielli sound. His writing for the Rheostatics is often hook-laden, very melodic, full of carefully-placed sound elements, and accompanied by stories which sometimes transform into epics. Here, no melody has been sacrificed, but you have to listen closely to catch it. The songwriting is subtle, accompanied by just acoustic guitar.

This doesn't mean, however, that the album is simply a stripped-down, get-to-the-essence representation of Tielli's songcraft. It's a different sound altogether, one that gently beckons attention through delicacy balanced with a biting edge. "I put three bullets in its face /And I hung it from a tree /For the other ones to see /What happens if /You mess with me," Tielli pleasantly sings on "I'll Never Tear You Apart." This lyrical bluntness is often matched by percussive guitar playing, with Tielli making use of the old quiet-loud trick to great effect on "Double X." Throughout the album, it's the simple strength of the writing that makes ...Poppy Salesman so powerful, serving as a reminder of why the Rheostatics are such a treasure, and why Tielli deserves accolades of his own.

RECOMMENDED TRACKS: I'll Never Tear You Apart, Farmer in the City, How Can You Sleep