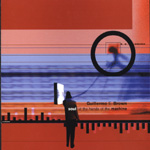 Soul At The Hands Of The Machine
Thirsty Ear ( )

Guillermo E. Brown is a percussionist who has recorded with artists as diverse as Matthew Shipp, Roy Campbell, and Spring Heel Jack. For his first release as a leader, he has assembled an impressive roster of talent from both the jazz and electronic worlds, including reed players Daniel Carter and Andre Vida, guitarist Morgan Michael Craft, turntablist Clay Holley and vocalist Latasha Natasha Diggs. Soul... is an intriguing fusion of free improvisation, funk, and hip-hop; tracks such as "AnikuRock" and "More & More" bring to mind Miles Davis' dense, roiling jazz-rock experiments of the seventies, thanks to Craft's wah-wah guitar and Carter's bass clarinet. Meanwhile, "Electro.Prayer.1" sounds like what would happen if computers were taught to improvise.

Fans of "smooth jazz" may be disappointed (or enlightened) by the dark, sometimes turbulent music to be found here. Throughout the entire album, Brown's drumming is nimble, inventive, and a powerful uniting factor; rather than place himself in the spotlight as a player, he prefers to lay back and blend in with the ensemble (though he does show off some monstrous chops on "Outside Looking In"). Soul... is part of Thirsty Ear's "Blue Series", a group of albums that hopes to bring together "many languages in a way that will hopefully challenge, probe, excite, and perhaps even anger listeners as we try to strip away conventions with a new convention." If all of their releases are as rewarding as Soul..., they should have no trouble in achieving their goal.

RECOMMENDED TRACKS: "If We Can Ever Find A Way", "AnikuRock", "More & More"