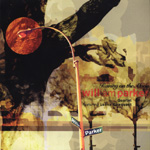 Raining on the Moon
Thirsty Ear ( )

A number of years back, I spent my first ever night in Manhattan watching renowned jazz bassist William Parker perform with and simultaneously conduct a thirty-odd piece brass, rhythm, and vocal ensemble known as the Little Huey Creative Music Orchestra. Now admittedly, I was riding a wave of near-electric energy that can only come from a summer's night in Manhattan coupled with a few (okay, several) pints of Brooklyn Brown Ale, but I was struck by Parker's innate ability to absolutely control the direction of the music without ever needing to step out front and dominate it. Such is the dual life of the bassist - they remain the intrinsic link between the melody and the rhythm and thus, can nudge songs in a myriad of different directions at their discretion. In the intervening years since my initial exposure to Parker in a live setting, I've seen and heard him perform a similar role in a variety of different settings, from duos to quartets and beyond. On Parker's latest, Raining On the Moon, he continues to lead from behind. This piano-less quartet is nominally pushed by trumpeter Louis Barnes and reedsman Rob Brown, but their contributions come across more like rich accentuations laid atop the stopwatch-tight rhythm section of Parker and drummer Hamid Drake. Parker understands the concept of rhythm so instinctively that he invariably creates an almost psychic link with almost any percussion-driven musician he plays with - whether it's pianist Matthew Shipp, drummer Susie Ibarra, or, in this case, Drake. Raining On The Moon is a fantastic example of a musician at the apex of both his compositional skills and his technical ability, but what really places this album on a higher lever, though, is the addition of vocalist Leena Conquest. Her deft and timbredly-rich interpretation of Parker's lyrics, particularly on the title track and "The Watermelon Song", evokes a politicized Abbey Lincoln in her prime. RECOMMENDED TRACKS: "Song of Hope", "Raining On The Moon", "James Baldwin to the Rescue"