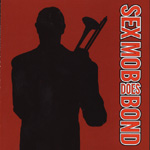 Slide trumpeter Steven Bernstein takes his funky jazz quartet into the heart of the oh-so-familiar songs of the James Bond legacy and turns them into smooth, sexy, funky variations of the classic fighting and frolicking songs that permeated such films as Goldfinger, From Russia With Love and You Only Live Twice. Sex Mob performs some really cool takes of Bond tunes turned into grooves that feel a lot like some of the more laidback Medeski, Martin and Wood material. I would imagine this has a lot to do with the fact that John Medeski himself is lending his signature brand of organ playing to this album.

So sit down, grab some popcorn, close your eyes, put the cans on and picture your favourite film in your head while you listen: Think of gyrating nude silhouettes as you nod along to "Dr. Yes". Picture the chase through "Battle at Piz Gloria". Sneak into the enemy headquarters with "Bond with Bongos". Make sweet love to various double agents during "Nobody Does It Better".

Sex Mob Does Bond is a solid album and fun listen. If you're in a slow jazz kind of headspace this is a good album to spin.

RECOMMENDED TRACKS: "This Never Happened To The Other Feller", "Bond With Bongos", "Dawn Raid On Fort Knox"