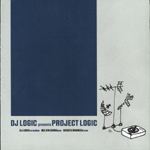 When I first cracked the wrap on this disc and read the credits, I got a nasty feeling about the music inside. Lots of names, lots of sessions and a sinking feeling that this was going to wind up like a lot of "all star" efforts that I had run into in the past (especially in the jazz world). In this particular case; a lot of noodle-y jams that sought redemption in the mix and winding up limp and apologetic as a result. Lotsa talent and zero inspiration. Well, I was partly right. There is certainly a lot of talent on Project Logic; Vernon Reid, John Medeski, Marc Ribot and Melvin Gibbs to name a select few and, as far as I can tell, the process is a let's-jam-and-mix-it-down-later thing, but in terms of the music produced, well, let's just say I was pleasantly surprised.

DJ Logic knows his shit and - more importantly (in the process of improvisation) - knows the people that can deliver the shit. From bubblin' B3 Booker T-organ grooves to full acid rockouts featuring some of the angriest tabla mixes I've ever heard, to Beans and Priest from the Anti-Pop Consortium rhymin' surreal, this is one satisfyin' piece of work! It contains music that fulfils some of the promise that Miles's "On the Corner" laid down in 1972 as a tarot card marked with the Black Prince.

And let's not forget the karmic presence of the godfather/midwife of "Bitches Brew" and "On the Corner", Teo Macero, blowing harmonized bursts of sax into the mix - a mix, by the way, that has the hand of Scott Harding involved. And let's also name the man on the 1s and 2s whose skills were honed with `live' instruments via the Black Rock Coalition; DJ Logic himself.

Musicality is still as rare as it ever was in the music world and DJ Logic knows music. Check this one out.