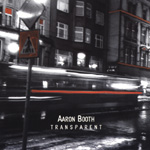 Aaron Booth has had a long history of being in bands. As a member of Sky Suspended, The Telstars, Pavonine, The Accomodations and most recently experimental pop outfit Shecky FormÃâÃ¢â¬Å¡, Booth incorporated his ideas and abilities into a context provided by his fellow players. However, on his first full-length solo outing, Booth (with assistance from members of Wooden Stars and Kepler) proudly took the responsibility of crafting his own tuneful folk/pop songs to perfection. His newfound artistic sovereignty resulted in Transparent sounding as if Booth has made the record he has always wanted to make. Transparent begins with a warm and inviting acoustic song titled "When She Appeared" thus accurately setting the mood of the entire record. At once, Booth's vocal stylings fill the listener's head with comparisons. Echoes of Elliott Smith, Rivers Cuomo, and Paul Simon will be detected. Further, lyrics such as: "If her heart is a castle/My body is a moat" illustrate the metaphoric and personal nature of Booth's verse. The second track, "Where Is That Son", sounds too traditional to be considered indie pop and yet it lacks the Celtic flourishes heard in ballads of bands such as Spirit of the West. Track three, "Sleep In Cinescope", is a pleasant pop song in which Booth proudly professes his love for New York and then cleverly admits that he has never been there before. Very much informed by Sloan's masterwork Twice Removed, "Sleep In Cinescope" is the album's highlight. From then on, while the songs may be melodically charming, they fail to completely engage. Starting quietly and gradually allowing the intricacies to come to the fore, "Quiet A Little More" is notable for Booth's note-perfect emulation of the dark yet beautiful harmonies found on the classic Simon and Garfunkel LP Parsley, Sage, Rosemary, and Thyme. However, the track lacks the arrangements that made that record so successful. Unfortunately, the latter half of the record suffers from some of the same inadequacies. Booth's ideas are strong; however, in order to stand out in the indie singer/songwriter genre, his songs need to be further developed. As it stands, the latter half of the album tends to be a little tiring. Ultimately, Transparent is recommended to those who like their folk/pop without twists. The songs sound as if they should be overheard rather than listened to. Booth's potential is unquestionable; however, we must wait until his next release to see if he will harness it. RECOMMENDED TRACKS: "When She Appeared" "Sleep In Cinescope"