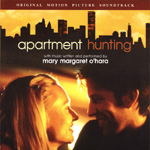 Let's start off with a premise (mine): Mary Margaret O'Hara is a vocal giant on par with Betty Carter, Aretha Franklin and (hell, why not?) Diamanda Galas. Before you start making assumptions about my drug habits I would like to add a disclaimer. Like Betty Carter and unlike Aretha and Diamanda, O'Hara has a very bizarre relationship to the music she sings over/with. That is to say she sings extremely iconoclastic stylings over a backdrop of very well played and very conservative arrangements. This unnerves me and puts me into an interesting situation where I'm totally blown away by this woman's musicality at the expense of the relative conceptual blandness of the song forms. I keep wanting her to play in a context that would put her voice in a position of being a conceptually integral part of the music as opposed to being a genius foil. On the other hand, the songs she sings are hers alone and the fact that she still manages to write and sing a standard-form unrequited love song that freezes me in my tracks ("I Don't Care") makes me think again about this wonderful thing we have called "music." O'Hara sings amazingly on this disc. From the first track where she manages to nail Billie Holiday's phrasing to "Rain" where she's sings and accompanies herself on another track and scats like nobody's business (and manages to hit a high note that would make Aretha proud) to the scat-muttering in fake Spanish on track seven - "Scary Latin Love Song" - that would make most free jazz saxophonists go back to the practice room. These feats are reproduced throughout the album. There's one song performed by Toronto's Klave Y Kongo that I like, two by the filmmaker that I don't and anything that O'Hara's on simply rocks. Be grateful that this person exists and occasionally puts out music. RECOMMENDED TRACKS: "I Don't Care", "Scary Latin Love Song", "Rain" - Nilan Perera, CIUT Radio, Toronto, ON