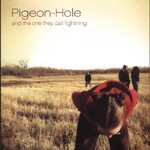 And The One They Call Lightning
Aquarius ( )

Pigeon-Hole are fronted by two women, Isabelle Fahmy and Natasha Szuber, and their harmonies are what make this a nice record to listen to. Their lyrics are also quite enjoyable featured on quirky songs about nothing in particular. Strange turn of phrases appear throughout the tracks on their debut. An example of this comes from "Cops And The Crazies (Got The Time)" which includes "Low-income dinner, TV dinner/Maxed- out credit, broken record/Dropout figures, two-way mirrors/Night is better/But today my failure brings me out to this taxi." I have no idea what that means but somehow I can relate to it, as I can with most of the songs on this record. Rounding out the quartet is Adam Blinick on bass and percussionist Wade Mannricks. The music that surrounds the words on And The One They Call Lightning does so in a soft loving embrace. The vocals are definitely the feature but the guitar, piano and drums help complete the ethereal feel. Added to the basic folk-pop sound are the works of turntabalist Vitamin F, pedal steel and mandolin from Blue Rodeo's Bob Egan and some dropped-in spoken word from Kinnie Starr. The final result is not some rehash of the Indigo Girls, but something unique in its own right and a pure pleasure to play alone or with friends. Pigeon-Hole add two bonus tracks to this disc with a cover of Twisted Sister's "We're Not Gonna Take It," which is definitely worth a listen, and the unaccredited `sellout remix' of "Triggerman". This band is forward. RECOMMENDED TRACKS: "Cops And The Crazies (Got The Time)," "Triggerman" (both versions), "We're Not Gonna Take It" - Rob Pingle, CFUV Radio, Victoria BC