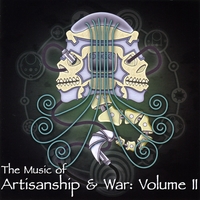 Generally, when people are asked to think about music from Canada’s maritime provinces, the first thoughts that likely come to mind are folk and country singers Anne Murray or Stompin’ Tom Connors, Celtic fiddle music, jam bands, or indie rock. Tucked away in the bars and basements of small towns on Canada’s East Coast, however, hides a thriving underground metal scene from Saint John to Summerside to Sydney.
The Music and Artisanship of War: Volume II, released by Dartmouth-based Diminished Fifth Records, is the label’s second compilation of the maritime region’s heaviest bands. On Volume II, Diminished Fifth exposes listeners to thirteen artists not previously featured on the label’s earlier 2007 release, such as Coffin Birth, Black Moor, Amnesty, Iron Giant, and Cephalectomy. Recurring favourites – perhaps back by popular demand? – include Hellacaust, Gallactus, and Orchid’s Curse.
The compilation boldly explores the spectrum of loud sounds, from hardcore, death and thrash metal to sludgy, fuzzy, heavy, stoner rock. Even a few melodic, new-school, technical metal acts from Fredericton make the cut.
Certainly, keep the compilations coming – they’re for anyone that loves metal, and especially for those looking to expose themselves to underground, independent metal from the maritimes. Any self-respecting ‘banger should surely be familiar with at least one of the featured artists on this comp, so give the others a listen, come out to a show, and be truly blown away by the maritime metal music scene.