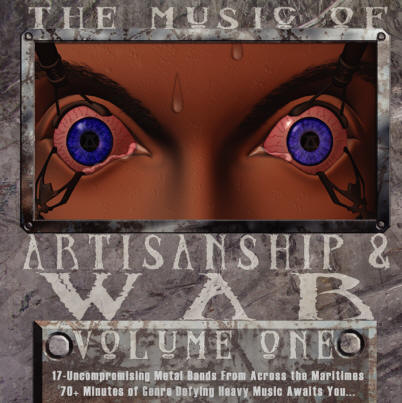 Diminished Fifth Records is the perfect name for a metal label; the diminished fifth is also known as the devil's note (the intro of "Black Sabbath" is a classic example), and was actually banned by the churches for being too cool for public consumption. The metal on this compilation, Artisanship & War, is full of the devil's note at every turn, alongside many other tonalities of darkness. The 17-song CD highlights some of the best metal from the Canadian East Coast. Terrabomb's discordant double guitar harmonies and odd-time blast-beats immediately kick the collection into overdrive. Chara's "Woman Is A Danger Cat" intersperses churning, heavy groove with Slayer-esque parallel trills, a vocal sound that (suitably) brings images of vicious cougars to mind, and even a "whoo!" for good measure! Although the overall vibe of Artisanship & War is dark and hardcore (Good Lookin Out, Rusted Dawn and the high precision of Bound In Human Flesh are standouts), the neo-classical influence busts through in a few spots here and there as well, such as Dischord's "Nuke Face", the triple-meter sections of "Goodbye Is When The Coffin Closes" by The Orchid's Curse, and the solo section of the Pariah track. "Pity Parade" by Huge, probably the most experimental track in the collection, sounds like machete-wielding clowns transforming into schizoid werewolves. The Gallactus track is particularly frickin' heavy. This compilation stretches in several metal directions at once - in fact, "I Wanna Love Death Forever" by War Pony basically boils down to good old rock 'n' roll! The CD is ripe with good moments, so it's tough to pick favourites. Metal is alive and well on the East Coast.