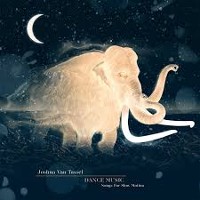 Imagine you are swimming in a sparkling ocean and a pod of whales passes you by humming. Or you’re up in space, floating, while the universe sings a lullaby to the planets. That’s what Joshua Van Tassel’s new album Dance Music: Songs for Slow Motion sounds like. Kind of. It also sounds like an underground cathedral holding a service.

Dance Music: Songs for Slow Motion takes Toronto’s Van Tassel in a more ambient direction. While his music has always been fueled by an expert mix of sounds that are deeply familiar yet hard to place this release is less rhythmic than 2013’s Dream Date. All but one of the tracks soars past the 5-minute mark and there are no vocals. Each of the poetically and playfully named tracks (see: “Two animals that don’t exist, falling in love” or “Loneliest spaceman”) melt into each other making it difficult to seperate individual songs. Instead the tracks demand to be understood in the context of the full album.

Spend time with Dance Music, set it to repeat, and it will take you to the other side of your day. The day that could be. The day that is wide, cool, and calm.