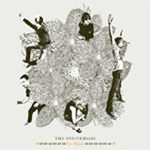 Damn the sophomore jinx. 2000's Designing A Nervous Breakdown had an angular, desperate feel to it, like the songs might fall apart at any second. It had early 80s production quality that made the drums sound hollow, the singing intense, and the keyboards were of the analog-driven vintage variety. On Your Majesty, the band could only either stay within that sound or break away from it entirely; they chose the latter. "Sweet Marie" is pretty catchy, as are a couple others, and there are some decent vocal harmonies, but in general there isn't anything that really grabs you.

With every listen this record grows on me, but it's really not a very accessible record; only the Pixies could triumphantly piece together such strange chord progressions. I think one of the dudes in this band thinks that it's cool/retro/vintage to wear big granny glasses ÃâÃ¢â¬Â¦ la Sally Jesse Raphael circa 1976. Never cool never cool.