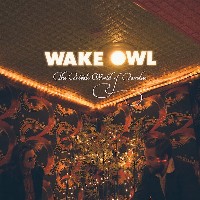 To be able to quit the day job and have music as the main focus, is a goal for many. This usually means getting signed to a major label. Wake Owl did just that when they joined Vagrant records in 2013. By that point, the Vancouver band had already independently put out their debut EP in 2012 as a free Internet download. By signing a contract with a major label, it appears the band has given up aspects of their image (perhaps they had to). And with that, the packaging of this, their debut full-length, The Private World of Paradise leaves much to be desired. It registers as an adult-contemporary or an easy listening album.

This is problematic as it could potentially put-off a possible fan, as it doesn't possess the aesthetic of a likely Wake Owl listener. Yes, it could be argued that the music speaks for itself, and it does. The album is textured with songs that demonstrate the band’s superior musicianship and mastery of folk-pop. The band doesn’t sit in the well-worn pocket of Mumford and Sons but instead their songs are distinctive from one another, lined with improvisation.

Unfortunately, in order for the listener to retrieve the album and hear the worthy music, they must first get past the les than stellar album designthat serves more as a deterrent  than an invitation.