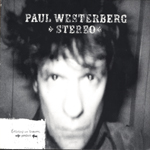 In my humble opinion Paul Westerberg is one of the best songwriters to emerge from the early days of punk/college/alternative rock. Need evidence? Take the time to listen to The Replacements' Tim. Now, while I may claim that to be one of his finest moments, you can always find a few gems on any of the Replacements' records or one of his infrequent solo releases. I held out a lot of hope for his newest album - the 2CD Stereo - based on a paragraph written on the inner sleeve. The basic gist of this statement was that Stereo was written and recorded over two years with little to no effort made to realize a perfect, polished product. The goal was to end up with a finished collection of songs that felt "real and honest." On the first disc, the songs are acoustic and sparse for the most part, with the occasional song being filled with a full band. It's on the acoustic songs where Westerberg's emotionally honest lyrics and strained singing style are most apparent. The recording on these first batch of songs is very unproduced and rough at times, feeling more like he just hit the "record" button and started playing. This ends up giving it a more intimate sound, like you're listening to some home recordings that he meant to record for his ears only. Tucked away within the cardboard package is the second disc, which showcases more of his "rocking" side, and it shows that while he can play some heart-wrenching acoustic songs, he can still kick out the jams on a moment's notice. On this disc he assumes the pseudonym Grandpaboy, which might just be another way of saying The Replacements. These eleven songs will definitely make you think of his former band, no matter which of their records you cherished most. This set of songs has all the styling of the Paul Westerberg of yore. There's guitar lines that sound like updated '60s garage rock riffs, higher pitched back up vocals, basic rhythm backbeats, and of course, the same great lyrics and vocals that we've come to expect. Overall this is one of those rare double CDs that actually works and makes sense. There's songs on here for any time and mood. RECOMMENDED TRACKS: "Let The Bad Times Roll", "Got You Down", "Let's Not Belong", "I'll Do Anything" - Shaun "Citrus" Cowan, Calgary, AB