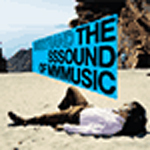 I keep thinking this disc has a singular style, but Burgalat continues changing things from track to track. The Sssound of Mmmusic starts out in a uniquely French cinematic and Serge Gainsbourg-style with the great track "Aux Cyclades." From there, its off to the land of French pop, breakbeats, and electronics. Now that I've heard the disc all the way through, I feel confident saying that it's a good mix of modern French pop.

Organs, strings and guitars are used heavily throughout, which is a welcome change from the synthesizers that are used in so much of today's pop music. Many of the tracks on The Sssound of Mmmusic have a smooth, rolling feel to them, and shuffle along at a decent clip. Most of the tracks are in the mid-tempo level, while a few are definitely downtempo.

There are also plenty of vocal tracks, often in French, so I can't comment on the songs' content. The singing style is lounge-y, and the music complements the vocals nicely. Male and female guest vocalists sing on a little over half the tracks, as do children, on TSOM (The Sssound of Mmmusic).

After doing production and remix work for many bands, The Sssound of Mmmusic is Burgalat's debut album. Fans of Stereolab's laidback music and of the work of the band Air will enjoy this album.