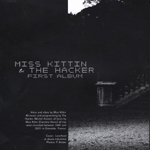 Miss Kittin and The Hacker ( )

Generally speaking, the electro-noir music on Miss Kittin & The Hacker's First Album is minimalistic. Miss Kittin's vaguely nasal European voice deadpans naughty and ludicrous musings over The Hacker's programmed tunes. Although she is also an accomplished DJ, she eschews knob-twiddling (pun intended?) for the sake of NC-17-rated lyrics. She says things like, "She is very sexy like life on MTV," and "To be famous is so nice: suck my dick, kiss my ass." Perhaps she is drawing on her life experiences. After all, she is a former pole dancer, and one of the tracks is about one of her stripper friends.

This silly New Wave Euro-disco house is the sort of music I could imagine Dieter from Sprockets dancing to with his monkey.