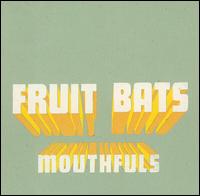 Music is moving out of the garage, and on to the porch. Chicago brings the world yet another fantastic band: the Fruit Bats. The band is the brainchild of former I Rowboat and Califone member Eric Johnson, but also has added touches by Gillian Lisee, and a few other rotating friends. Mouthfuls is the band's sophomore release, and it shows just how much they have matured since 2001's Echolocation. The opening track, "Rainbow Sign", gives us instant knowledge of the album's gentleness and beauty. It boasts delicate piano, acoustic guitar, soft Beach Boys harmonies, layer upon layer of percussion, and various sounds provided by household objects. Johnson's guitar playing is simple and effective, reminiscent of Lou Reed circa Velvet Underground. Mouthfuls continues with this mood until "The Little Acorn", the album's highlight and climax. It showcases everything that is wonderful about Mouthfuls: songwriting, musicianship, lyrics, mind-intrusive melodies, beauty, and sun-drenched pop bliss. It is six minutes and twenty-five seconds of your life you will want over and over again. Finally, the album drifts in to the second half of the album with the instrumental interlude "Track Rabbits". A song that is heavily reminiscent of all that is good about the fist solo albums by Paul McCartney and Paul Simon. Yes, both those Paul gems thrown in a blender with some Pet Sounds and then you have the feel of this song. It proves to be a nice transition to the latter half of Mouthfuls. The next three songs are much more mellow than the first half of the album, but equally charming. The twangy duet "Seaweed" has Gillian Lisee contributing clearer harmonies and back-up vocals than any other song. After sinking into the comfortable and soothing sounds of the last half, Mouthfuls ends with the upbeat "When U Love Somebody"; a song that could have been performed while drinking in a boxcar of a train, traveling across the Southern states. Mouthfuls is the kind of album the Fruit Bats would perform on their porch during a balmy day of summer. The album is inviting, warm, and downright neighborly.