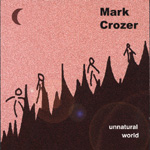 It is within a believable realm that British-born/Canada-living Mark Crozer is being compared to Elliott Smith. That said however, I absolutely cannot see where "Beatles-esque" comes into the picture. Crozer says that he grew up listening to the Beatles, but didn't we all? It really doesn't seem as though the Fab Four helped to influence Mark's songwriting, and there doesn't seem to be an ounce of the Beatles' pop sensibilities on Unnatural World, with the exception of the blatant "borrowing" of Strawberry Fields Forever at the beginning of "Tragic Man." Crozer does have a pretty voice, pretty melodies and lovely abilities with an acoustic guitar, but he's lacking the most important thing Elliott Smith possesses as a songwriter: balls. Admittedly, these are songs on Unnatural World that, on repeated listens, I might hum to myself while picking out oranges at the grocery store, but they lack something, some sort of fire, some ingenuity, something that makes me say, "My gosh, this is such a great album! I think I'll listen to it again." Instead, I just shrugged when it ended and thought about how I should really feed my cat. I will give Crozer some credit, however. This is only his second album, and seeing as how he does have a nice voice and interesting melodies, I will cross my fingers for the next one. Unnatural World is not a terrible record, it just doesn't seem to possess much worth talking about. Which begs the question: how did I manage to write 250 words then? RECOMMENDED TRACK: "A Tragic Man" - Bryndis Ogmundson, CFUR Radio, Prince George, BC