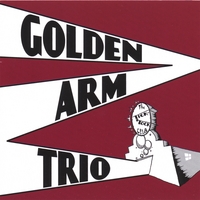 Within the realm of "soundtrack music" the scope of mood, texture, and structural form can be as varied as the films they are accompanying. Perhaps the one defining characteristic of the genre is the dominance of the instrumental approach; other than that it is open territory. Graham Reynolds, leader of Austin's Golden Arm Trio, is no stranger to the possibilities yielded by this compositional field and on The Tick-Tock Club this can be heard from start to finish.
Opening with the first of three tracks serving as a tribute to Russian composer Dmitry Shostakovich, The Tick-Tock Club moves from mournful cello music into the highly explosive rhythmic title track. Side by side, these two pieces are the epitome of contrast and manage to set the trend for the rest of the album. In a way this would suggest each composition is from a different scene within a very dynamic film. However, unlike Reynold's music for Richard Linklater's "A Scanner Darkly", Golden Arm Trio is working without an actual film here. Other than two "crime-jazz" pieces which were written for stage productions, The Tick-Tock Club manages to embody the spirit of great soundtrack music without ever having the visual companion one would expect. In this respect Golden Arm Trio can be praised for their imaginative works across a wide palette of mood and form, but this same quality of extreme contrasts is not without its drawbacks.
While The Tick-Tock Club is comprised of almost entirely of top-notch music, the consequence of sequencing the album's tracks with so much emphasis on diversity ends up being a huge sacrifice in terms of listenability. The three Shostakovich tributes (as mentioned above) are beautiful, sorrowful pieces that unfortunately have their resonating effect harshly abbreviated by being placed to tracks of almost incompatible mood. Only the last of these tributes partially escapes unblemished due to its placement as album closer. Fortunately the more lively material is slightly less affected by the dynamic sequencing. These faster (and louder) tracks often seem to leap out of the speakers after a somber mood has been cast by a previous piece. This is not to say that they are not as strong as the slower tunes, in fact the choice cut of The Tick-Tock Club has to be the title track with its "can't sit still" punch grooves. However, the only moment where the contrast in styles is amalgamated into a cohesive whole is on the ninth track "Greyhound". By bringing some of the physicality of the rhythmic pieces into the melancholy mood of the more classically orchestrated songs "Greyhound" serves as a gateway between both. In this sense Golden Arm Trio could have strengthened the continuity of the listen by including more compositions that followed in a similar mold.


Though definitely not an album to grab for a consistent mood from start to finish, The Tick-Tock Club will likely appeal to fans of Zappa and Zorn with perhaps a sprinkling of Primus, Mr. Bungle and Dillinger Escape Plan thrown in there for good measure. It's worth the listen, so if you get the chance, check it out.