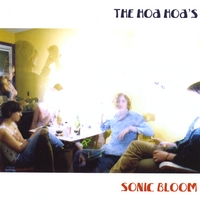 As part of Toronto's Optical Sounds roster, The Hoa Hoa's deliver a solid chunk of psyche-shoegaze on their aptly titled Sonic Bloom recording. Coming in at 15 tracks with a running time of just over an hour, the album definitely settles into a groove and makes no bones about firmly planting itself in the soil of a well-trod genre. This is both a strength and weakness for The Hoa Hoa's as they are able to find a cohesive sound rooted in tried and true forms of the past, but, on the same token, are relatively non-participatory in the current frontier of musical exploration. While Sonic Bloom may be an enjoyable listen for fans of shoegaze, dreampop, and British folk-psyche, the reality is that this material would have needed to be released over two decades ago in order for it to be anywhere near exciting or cutting edge. However, taking into consideration that being on the cusp of contemporary discovery is not the intent of all groups; The Hoa Hoa's do a great job of capturing a beautiful sound from days gone by.
Beginning with "Yellow Jacket" Sonic Bloom introduces a glazed jangle of strummed guitars and straight ahead rhythm patterns. Though largely borrowing from the shoegaze genre, a sprinkle of British-psyche is added for good measure and the cross pollination is revealed to be an effective one. This blueprint is only strengthened on second track "The List" as atmospheres become increasingly blurry and the introduction of the "psyche" element is brought to the fore on the chorus. Things stay strong until "Bottles" arrives with distractingly poor lyrics taken from half-baked hippie imaginings. Unfortunately this is also the track where the faux-British accents really begin to become obnoxious. Honouring your influences and incorporating those stylings into your own sound is to be expected, but believability is also key and vocal delivery is one area where authenticity can be most easily ascertained. For The Hoa Hoa's the attempts at delivering British accents need to be greatly improved or, better yet, dropped.
As Sonic Bloom nears its conclusion "Fantasy" presents a slightly different angle as the energy is greatly reduced in favour of a melancholic aura. This transition is a welcome change and also acts as a prelude for the slower, sadder, and even more beautiful "Circles"; a song that, despite involving almost no compositional dynamics is a definite highlight of the album. While this would have made a perfect closer, The Hoa Hoa's choose to end on "Happiness is a..." which, although remaining in lower state of energy, is a weaker song from start to finish. Despite this, Sonic Bloom comes across as cohesive effort and should be recommended to all lovers of atmospheric music (shoegaze in particular). For those interested in new sounds or even a fresh update on an older aesthetic The Hoa Hoa's are most likely not the band to look to.