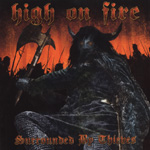 When the Man's Ruin label suddenly closed up shop in the summer of 2001, it made me wonder what was to become of some of their bands; especially High On Fire, a power-trio from California who had pummeled my eardrums senseless with their debut release The Art Of Self Defense. Fortunately, like former labelmates Alabama Thunderpussy, High On Fire resurfaced in 2002 on the Relapse label and have since released their second album Surrounded By Thieves. The press release accompanying this new slab 'o sludge states that the disc has "...a heavy-handed approach and a sound that crashes like thunder..." That's putting it mildly. High On Fire aren't trying to write catchy pop tunes here, they simply want to bombard the listener with pure heaviness and I guarantee that some of the riffs on this record will be sticking in your head for quite some time. That's what Surrounded By Thieves is all about: the riffs! It's perhaps a little far-fetched to call these guys today's Sabbath, but the heavy-as-hell sounds coming at you fully-amped will indeed invoke the thought. Guitarist/vocalist Matt Pike formed this band after the demise of stone/drone-legends Sleep, but his new band does step up the tempo here on occasion, displaying a punkier element to their riff-a-holic sound. The opening minute of leadoff track "Eyes & Teeth" unravels with distant, growing feedback, reminding you of an approaching thunderstorm, before the tone of the whole record hits you over the head. With tracks like "Speedwolf", "Nemesis", and the closer "Razor Hoof", High On Fire grab you with the almighty riff, paying homage to the likes of Cathedral, Motorhead, and of course, Sabbath. Pike's vocals don't seem to be all that important here - guttural, often buried in the mix, and sometimes reminding me of a deathlier Lemmy. Like their debut, Billy Anderson's production is incredibly muddy and at times, difficult to digest. This murkiness certainly enables the rhythm section of drummer Des Kensel and bassist George Rice to fill out the thick bottom-end, but the muddy sound as a whole is an acquired taste. If you're looking for catchy tunes, you may not find the sludge on Surrounded By Thieves your cup 'o tea. Granted, many of the songs here do sound similar, but that's not the point. Thicker than grandma's molasses, High On Fire intend to crush you, and for that, they indeed succeed. RECOMMENDED TRACKS: "Eyes & Teeth", "Nemesis", "Surrounded By Thieves" - James O'Connell, CHRW Radio, London, ON