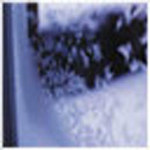 The Loss of Our Winter
Where Are My ( )

Below the Sea are from Montréal. They make slow-tempo post rock. Therefore, they surely are part of the collective that is Constellation Records. Surprisingly, they're not, but this brand of cold atmospherics and apocalyptic visions would most certainly fit in with Constellation artists like godspeed you black emperor! (at their quieter moments) or Do Make Say Think. What was once a new, innovative sound has now become yet another sub-genre, and Below the Sea could be a textbook example. Swirling sounds that evoke windy winter days? Check. Disembodied spoken-word voices spouting nonsense over airy cello and guitar? Check. One or two moments where everything speeds up frantically and cymbals crash for emphasis? Oh yes. It's difficult to pull highlights from the album because everything flows together with one track bleeding into the next. One can only detect minute changes: the icy feel of "Inie" which starts the album, the dark mood accompanying the voices on "93 Stars," the almost-crescendo that hits the middle of "We Lied There for So Long." Below the Sea must be lauded for their talent in sculpting atmosphere, but lovely as it is, there isn't enough tension to grasp anything - it dissolves easily under close scrutiny. By the time "Black Monday for Investors" fades out slowly at the end, the listener isn't really aware of all the sounds that have passed, only a general moodiness, and the feeling that it took an awful long time to get there. RECOMMENDED TRACKS: "93 Stars," "We Lied There for So Long"