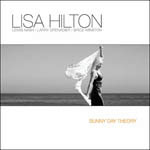 Pianist Lisa Hilton’s latest offering is a mixed bag of originals and instrumental arrangements of hits from the folk, pop and jazz world. The titles of her original compositions speak to her life in California. “After the Fire” alludes to the all too frequent fires that that state has witnessed in the recent past and the ever present beautiful surroundings are represented with titles like “Malibu Morning” and “Sunset at the Beach.”

Hilton is an excellent pianist and shows off her ensemble playing throughout Sunny Day Theory, with some complex rhythms as in “Melt Down.” I wouldn’t be surprised to hear this music as a theme for a yet to be thought up radio show on CBC or NPR. It’s very catchy. Yet, she takes a more bare-bones approach for Hoagy Carmichael’s “Skylark” and it also works. She also shows she can play the blues and tears it up good on the Zawinul composition. Playing alongside Hilton, is Lewis Nash on drums, Larry Grenadier, bass and Bruce Winston on tenor sax. The latter appears on around half of the tracks. On the opening track, the mambo “Heat Wave,” the interplay between Winston and Hilton cooks, with the sax playing most lead parts and the piano used as strong support. Winston also takes it up a notch for their arrangement of the late Joe Zawinul’s “Mercy, Mercy, Mercy.”

The first time I heard this CD, the musician that stood out the most on it was the drummer Lewis Nash. His intro on “So Blue” sets up Hilton’s wonderful, bluesy piano and he tears it up on the opening mambo. Bassist Larry Grenadier is pretty much the best bass player in American contemporary jazz, so I can’t really add anything about his playing that hasn’t already been said. Perhaps the only down side of this CD for me was the choice of pop/folk covers. I found the arrangement of Pete Seeger’s “Where Have All the Flowers Gone?” to border on elevator music and even Grenadier’s strong bass line couldn’t save it. And horror of horrors, I’m getting a little tired of jazz musicians covering Joni Mitchell’s work (and, yes I am the guy that gave Herbie Hancock’s “River : the Jonie Letters” a glowing review).Hilton covers Mitchell’s “Ladies of the Canyon,” in a somewhat nostalgic fashion (according to her liner notes), yet I find little inspiration in this arrangement. Lisa Hilton’s liner notes, also tell of recent emotional upheavals in her life. It is not uncommon that an artist will take inspiration from such events. I feel most of Hilton’s strongest tracks are her original compositions, like the previously mentioned “Melt Down” and ominous sounding “After the Fire.” Her dark piano and Nash’s drumming really got to me on this track.

Overall I enjoyed Sunny Day Theory. The musicianship is well above average and although I found a lack of focus thematically, that probably makes little difference in an i-tunes world where tracks are often purchased individually.