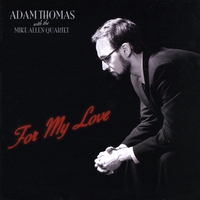 For My Love
Pumpkin Pie Music ( )

Vocalist/bassist Adam Robert Thomas of Vancouver has put together a CD of standard jazz ballads that compliment his vocal style. This is a labour of love for Thomas. For starters he is a big fan of the American Songbook, and secondly he has chosen songs that he and his wife Erica love to listen to and perhaps some that remind him of her. There is a nice variety of ballads here. Most of the songs come from composing teams that were known more for their song writing than their performing. Only the name of Ned Washington appears twice. Although, trained in drums, trumpet and his principal instrument bass Thomas has been singing in church since he was a child and only started singing at gigs when well respected west coast vocalist Kate Hammett-Vaughn encouraged him. While For My Love is a CD of vocal ballads, the arrangers Thomas and pianist Miles Black make full use of the band with most tracks averaging around five minutes long leaving lots of time for solos.  The arrangements have the soloists playing in a variety of tempos so there is not just one ballad tempo that could make listening to a whole CD of ballads a chore. Also, some tracks use a trio arrangement and some use the full quartet. As a singer, the voice of Adam Thomas suits the material he has chosen for this project.  I’ve always contended that ballads are harder to sing as vocal flaws can easily be hidden in up tempo arrangements. There is no need to hide his voice. He may have minor limits range wise but he uses this as a positive and doesn’t stray out of his range. Some of his best vocal work is on the Arthur Altman, Jack Lawrence compositon “All or Nothing at All” and the Victor Young, Ned Washington classic “My Foolish Heart.” Mike Allens’s group (which includes Adam Thomas on bass) is a very good band, but the piano work of Miles Black is simply stunning! His work on the Hoagy Carmichael/Ned Washington classic “The Nearness of You” is truly breathtaking. The other veteran Mike Allen on sax can bring to mind a lonely bar at 2 AM such as in “Ill Wind”or he can lurk in the background as he does in “All or Nothing at All” and then put his signature on the song with a tasteful solo. Adam Thomas the bassist and Julian MacDonough the drummer show that they know their way around a jazz ballad, despite their youth. MacDonough’s stick and brush work, while purposely subdued fits the selections to a tee. Thomas is a much sought after bass player on the Vancouver music scene. A closer listen to “Willow Weep for Me” and “Moonlight in Vermont” might help you understand why. All of this combined results in a very appealing CD.  I have often decried the lack of projects featuring male jazz singers and For My Love by Adam Thomas with the Mike Allen Quartet should keep me happy for some time.
Available at cdbaby.com
adamrobertthomas.com
myspace.com/adamrobertthomas