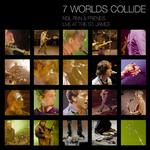 From his beginnings in Split Enz, to Crowded House, solo work and a side project with brother Tim, Neil Finn has graced the world with some of the most beautiful, memorable and influential pop songs of his generation. Finn's impact on pop music is far-reaching and there is no greater proof than the motley crew of musicians he got to join him for a five night stand in Auckland (in his home country of New Zealand): Johnny Marr, Lisa Germano, Eddie Vedder, Radiohead's Phil Selway and Ed O'Brien, and former Soul Coughing bassist Sebastian Steinberg. In a remarkable show of non-ego, Finn not only plays his own material, but also features select songs by his accompanying musicians. On the whole, the group perfectly captures the spirit of Finn's compositions: soaring yet earthy, bound for glory, but still within our reach. Vedder offers suprisingly strong vocals on the Split Enz tunes chosen for the CD, including "Take a Walk" and - most effectively - on the Tim Finn compositions "Stuff And Nonsense" and "I See Red." One of the weaker links is a cover of The Smith's "There is a Light" (featuring Marr on guitar, of course). The pristine clarity of Finn's voice is at odds with the original's sadder-than-thou Morrissey delivery. Finn's vocals are just too pretty to capture self-pity. But there are plenty of other highlights, including an acoustic version of the Finn Brothers' "Angel's Heap" and "Paradise," with harmonies to die for, and solid proof the brothers were born to sing together. "She Will Have Her Way," - from Finn's first solo album Try Whistling This - is a swirl of tempered sweetness so good it will have shivers running down your spine. The breath-taking finale of a stripped-down "Don't Dream It's Over," is truly grand, recapturing the sparkling life of a song many feel they have heard one too many times. Absolutely essential for any Neil Finn fan or anyone tired of the disposable tripe that passes for pop these days. As well, all the artists' proceeds will be donated to Doctors Without Borders' work in Afghanistan. (This review originally appeared in Stylus, CKUW Winnipeg's program guide)