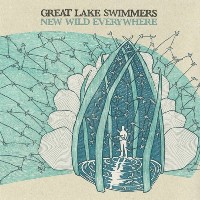 “There’s a new wild feeling dancing in the air/There’s a new wild everywhere,” sings lead vocalist and songwriter Tony Dekker on New Wild Everywhere’s title track. Living up to its name, the fifth full-length release from Toronto-based folk outfit Great Lake Swimmers includes fresh additions to the band roster, nature-inspired tales, and some of the group’s most upbeat tunes to date. But perhaps the most novel and ironic aspect of New Wild Everywhere is that it was primarily recorded in a studio. Known for their field recordings in unique locations (including a castle and an abandoned grain silo), Great Lake Swimmers opted for a more polished, accessible effort and took to Toronto’s Revolution Recording Studio for this release.

Easing into the album with “Think That You Might Be Wrong,” New Wild Everywhere makes a splash with new addition Miranda Mulholland on backing vocals and violin. With a delicate, swaying melody and rich instrumentals, the opening track affirms that the band’s enchanting lyricism has not been washed away. Likewise, the group did not completely forego location recordings—the meditative track “The Great Exhale” was captured in an abandoned Toronto subway station.
While peppy songs like “Changes With The Wind” and “Easy Come Easy Go” offer breezy melodies fit for the album’s springtime release, New Wild Everywhere finds its strongest footing in soft, heartfelt narratives. From the enchanting fields of “Cornflower Blue” to the introspective waves of album closer “On The Water,” Great Lake Swimmers dive into what they know best—the power and influence of (human) nature. New Wild Everywhere indeed.