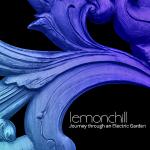 If there’s one thing deceptive about the title of this disc, it’s the silent spaces between tracks, which interrupt the flow of the journey. Presumably this approach was chosen with DJ’s in mind, allowing for easier mixing on the decks. That said, the sonic palette on Journey Through An Electric Garden is pleasantly spacey and clean - a little understated for my usual taste, but sometimes less is more. Being tired after a long day at work, a track like “En Larmes” is relaxing and energizing at the same time. The overall vibe is what I would call “slow, gentle trance” - it makes me want to dig out my old Tranceport disc or maybe Delerium, as Lemonchill strikes me as a cross between the two vibes.  The sore point on the disc is “Moonlight Sonata” (which bears no apparent relation to the Beethoven composition, just to get that out of the way) because of its directionless sense of rhythm and harmony which is filled with tonal clashes which never seem to resolve. This could make it appropriate for some abstract or tense scene in a movie soundtrack which begs an extra dimension of confusion or uneasiness, but in the meantime this track left me with a hunger for some more sensitive and well-constructed pantonality, à la Schoenberg (who else?). The next track, “Electric Waves Of Silence,” brings back good dancefloor memories and I can totally see it propelling a crowd of trancy dancers, just like most of this disc seems meant for. If you like peaceful electronic dance grooves, you’ll probably enjoy this disc.