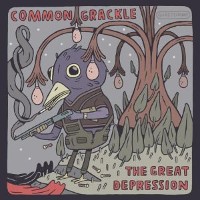 Common Grackle is collaborative duo featuring indie-pop songwriter Gregory Pepper and hip-hop producer Factor. The Great Depression is their full-length debut, and explores unique combinations of pop-rock and indie-rap conventions. The album begins with “Thank God it’s Monday”, a track which features legendary hip-hop artist Kool Keith. The Great Depression also includes two excellent vocal appearances by Ceschi, the founder of Fake Four Inc., who encouraged the correspondence that lead to the formation of Common Grackle.
The album includes a dozen short and memorable indie-pop songs, with mostly subtle rap influences that are incorporated sparsely. The duo promotes its sound as “psych-hop”, possibly due to its combination of experimental beats and the haunting melodic element of some vocal parts. The overall style of the album is reminiscent of Anticon Records bands like WHY?, especially the title track and “Magic Beans” (both featuring Ceschi).Pepper’s lyricism is distinctive and captivating, with lines such as: “they’re all grinning, Jack Nicholsoning” in “Churchill’s Black Dog” and “300 BPM yet somehow time is passing slow” in “At The Grindcore Show”. Other stand-out songs are the pop-ballad “Big Marquee” and the bizarre “Safe Word Play”. Common Grackle is an excellent combination that brings out the best in both artists to create something completely original and fun.